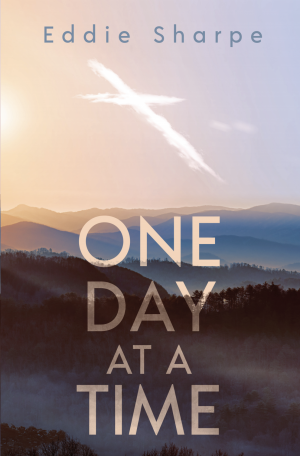 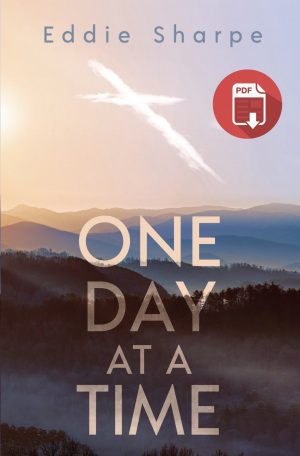 One Day At A Time – by Eddie Sharpe

Available in paperback, PDF download, or from Amazon and Amazon Kindle

ONE DAY AT A TIME is written for anyone suffering from or affected by cancer. On my 49th birthday, I was diagnosed with stage 3 cancer of the oesophagus and given a dire prognosis. Later that very same day I encountered God in my darkest moment. Some incredible force entered me, countering the rapidly approaching storm, which was threatening to destroy everything. It was overwhelming, undeniable, and more real than anything previously experienced. From that moment on, I just knew that I was going to survive! I wanted to understand that brief glimpse of something so much better. And even though I faced months of heavy chemotherapy, major surgery and very uncertain outcomes, I resolved to know God.

One Day At A Time is available from this website (the UK only) and is also available on both Amazon and Kindle.

ONE DAY AT A TIME is split into three parts:-

These events are based upon my own personal experiences, making this the most authentic part of the book. During any lifetime, there are few times when we are truly tested, but for anyone suddenly confronted with a cancer diagnosis, there is nowhere to hide. I wrote this book in the hope that my own experiences might benefit others, as there is no substitute for first-hand experience. Alcoholics are more likely to listen to recovering alcoholics than somebody who never drank. And criminals are more likely to listen to ex-criminals than law abiding citizens. Only those who have actually experienced a particular reality have something authentic to say to those similar situations. Cancer can happen to anyone at any time,

ONE DAY AT A TIME but the psychological challenges are the same. Without my faith in God, I am not sure that I would have survived, and things would certainly have been much harder. For anyone forced to confront cancer, their world has suddenly been turned upside down in previously unimaginable ways. Everyone knows that they are going to die, but they don’t really know it until forced to confront death as an imminent and distinct possibility. In many respects, I’ve led a charmed existence, having had various close shaves, including almost being struck by lightning. But cancer was different, because the danger didn’t pass in a few moments, but stretched out far into the distance. This predicament forced me to ponder the big questions. I quickly understood that the fight against cancer isn’t just physical. Ultimately, this is psychological and spiritual warfare, fought in the battle of the mind.

During my illness, I studied the Resurrection, the Shroud of Turin and Marian apparitions. And to my surprise, the evidence was far more compelling than expected. This reinforced my faith, which was a tremendous help as my physical condition rapidly deteriorated. Sometimes I struggled to climb just a few stairs, but spiritually, I felt alive, fearless and ready to face whatever came. For anyone diagnosed with cancer, belief in God, miracles and eternal life is surely far more appealing than the prospect of total oblivion. It’s easy to be agnostic or atheist when life’s going well, but what about when things go horribly wrong? And during such difficult times, the limitations of modern medicine, money and people quickly becomes apparent. PART 2 SUPERNATURAL provides strong evidence to support the existence of God, miracles and astonishing phenomena, unexplainable by modern science.

When I fell ill, I believed that God and science were incompatible. At that time, I strongly believed in evolution, without knowing why.

However, my belief in evolution became increasingly challenged when I researched subjects like the fine tuning of the universe and the complexity of cells. And so over a period of time, I eventually concluded that evolution raises many more questions than answers. In recent times, there have been astonishing scientific breakthroughs, but far from disproving God, the evidence points increasingly towards a creator. When I stopped believing in evolution, God and science became compatible, which dramatically changed my worldview. Suddenly, God was no longer marginalised on the sidelines, but was omnipresent. This gave me even more reason to believe, when on the face of it, there was little to be optimistic about.

There are no reviews yet.